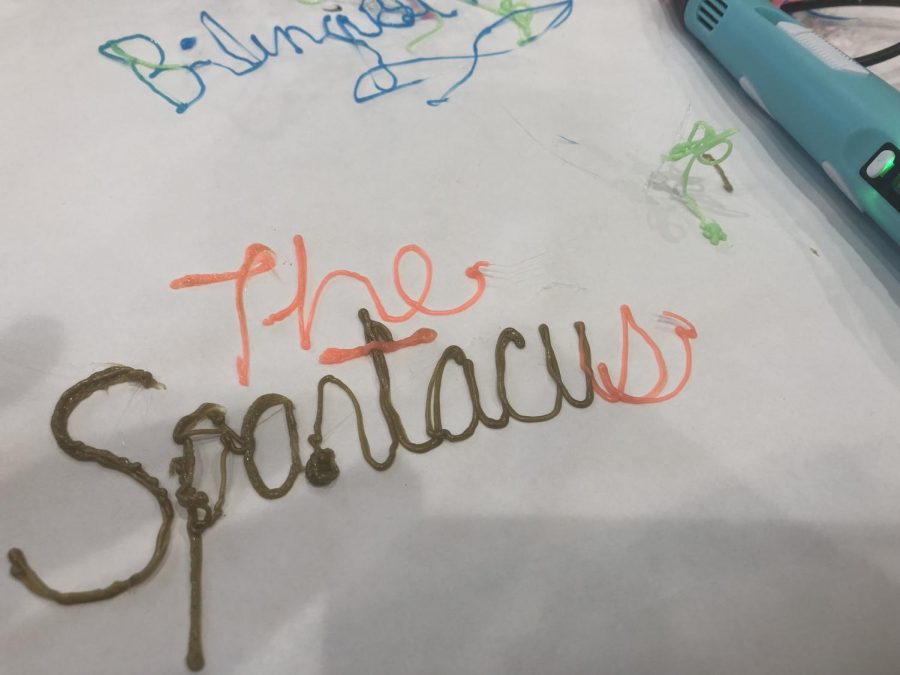 Created with a 3D pen.

What was once a bunch of musty rooms including the orchestra space, Mr. Wicker’s office, a storage area for scenic props and another office for the drama department, has transformed into a suite featuring enormous electrical outlets in bright yellow, brimming with power, hanging from the ceilings onto tables.

Fabrics, tools and colorful gadgets surround you. There are 3D printers, virtual reality goggles, Wii-like Z-spaces, green screens and so much more living inside of the four connected rooms that make up the workshop.  Walking around our Maker Space is like entering the future.

While Country Day may be a little late to the party, “Maker”  is, in fact, a movement that started in schools across America years ago as the trend to shift learning from teachers lecturing to students “making,” has grown.  An example of one of these schools is The Computer School in New York City, in which their maker space has helped attract more students, and encourage those already interested, to take on more elaborate projects.

Teachers are beginning to catch on here. Dr. Sealey’s and Ms. Spence’s AP Human Geography class recently spent weeks working there. Students were asked to build a 3D immersive media, or conceptual physical representation of ideas they had researched in class. Dr. Sealey commented on the Maker Movement, explaining that “the introduction of design thinking – the consideration and application of design related systems and processes to humanities and social science work – is somewhat revolutionary at Miami Country Day School and in schools around the world.”

While Dr. Sealey was excited to start, the students’ work has exceeded his expectations. “It’s hard to forget spending several weeks reimagining the geography of a cholera epidemic, for instance, or push factors in mass migration, but that’s what some of my students found themselves doing.”

Wendy Wyka, Media Specialist in the Lower School is also coordinating upper school activities and works in both upper/middle and lower school Maker Spaces on campus. She was one of the early proponents of developing our Maker Space, after running our own Maker Fair for two years. Like Cahill, she doesn’t consider the Maker Space to be “a program.” She describes it is a space “where students are going to create…to invent…to use it for, basically, ideas.” In fact, having multiple areas encourages collaboration between the Lower, Middle and Upper divisions. According to Ms. Wyka, “the whole school’s working on vertical planning,” which is an educational method in which various grade levels work together, and the Maker Space is an ideal breeding ground for this.

Most importantly, though, the Maker Space teaches students to be creative and sure of themselves. What makes this place different from a classroom, Wyka believes, is that many students are used to creating projects to try to please a teacher or fulfill assignment requirements. But she is convinced that in this space they can build more self-reliance and be introduced to the idea if only needing to meet their own expectations.

Dr. Sealey sees the Space as broadening the “learning palette” of MCDS. He believes that “if your strongest skills include building physical models of your ideas rather than taking multiple choice tests, then the Maker Space may be for you.”

What are some of the favorite things to do in the space? Ms. Wyka says that when students connect the things they see in the Space to real life and feel that connection, “there’s an excitement you can feel it in the room.” This reminds her of “why teachers teach.” Mr. Cahill can’t choose because he is “passionate about it all…From 3D printing to augmented reality and virtual reality to fabricating things with foam core and wood, making prototypes, testing them out, using simple machines to make mechanical devices, Rube Goldberg, toys… it’s endless.”

Open all the time to all MCDS students, if you have an idea, plan to schedule time at the Maker Space to work on it. Ms. Wyka and Mr. Cahill will make sure to work with students to have the tools and the materials they need to develop their ideas.