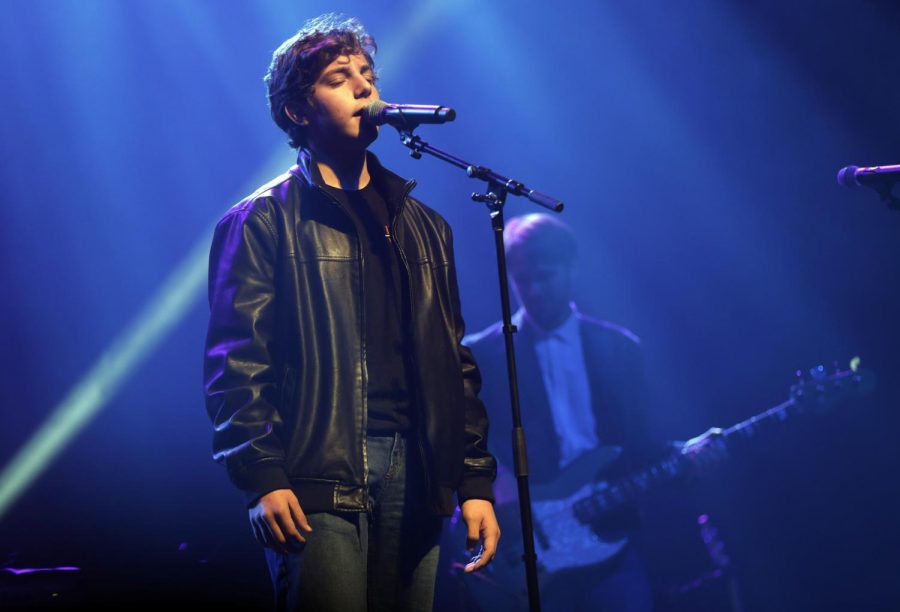 Ben Holcman found his "voice" with the support of other band members.

“Music means a lot to me because I feel like music is one of the more creative ways to portray what you’re trying to say. Listening to music, and even writing it, is very useful when you’re trying to get a point across. I always wanted to sing when I was younger, but…I kind of gave up singing for a while. After I saw that sports weren’t going to work out, I went back to singing earlier this year, which is when I joined CME. The songs that I enjoy singing the most are probably older, more acoustic songs along with some folk songs. These songs are usually easier for me to sing and they go best with my voice. In addition to singing I also play the trumpet for the school band. I have never tried to write music before, but that is something that I might be interested in doing in the future. Before going onstage I get nervous, but the encouragement I got from my bandmates in CME really assured me that I was going to do well. It’s the little things that my bandmates did that really helped me. For instance, they all came out onstage when I first practiced the song, they all said how excited they were for the performance, and they would all cheer after I sang. It’s very encouraging for me to know that I have their support. I chose to sing a song from A Star Is Born called “Maybe It’s Time” because I really enjoy that song and I am a fan of the movie. I also knew that the song would go well with my voice because it does not require me to hit any high notes. After my performance, members of CME put a cowboy hat on me because I was actually supposed to wear that hat for the performance, but I got nervous and didn’t end up remembering to put it on. I have gotten an incredible response to my performance from my classmates. I was really surprised that even after Spring Break, people were coming up to me and congratulating me. The response I have gotten to my performance has meant a lot to me because before attending Country Day, I went to a school where there was a lot of favoritism and not every kid was given an equal opportunity, so I did not get to do things like this. Going to MCDS and being supported and encouraged to get involved in music has been really great. My biggest challenge in singing is probably hitting the higher notes because I have a naturally low voice, so trying to sing higher is very difficult for me. Hopefully, in the future I will be singing a larger range of songs and a little less country songs. I would love to perform an old Elton John song.”