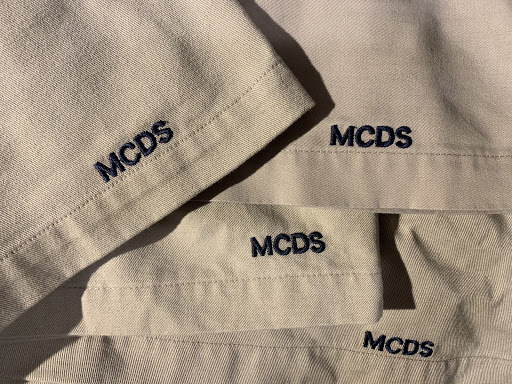 Does the hemline of a "skort" really detract from scholarly pursuits?

I’ll begin with the fact that I respect most rules.

Shorts and skorts at MCDS “cannot be too form-fitting” and “must be fingertip length or longer.” On the surface, this rule seems to be sensible. The basic reason behind such a rule is that the faculty and administration simply don’t want Upper School girls walking around in short skorts. That seems understandable, right? But why don’t they want this? To answer that question, turn to page 24 of the 2019-2020 Upper School Parent-Student Handbook. The first sentence of the “Dress Code” section states that the reason behind these rules is to “maintain standards of dress and appearance appropriate to the seriousness of academic pursuits.” Now, for a second question: what qualifies as something appropriate to serious academic pursuits and why don’t short skorts fit these qualifications? According to these rules, the female body has no place in the school environment because its form does not maintain certain standards of “seriousness.”

I’ve seen it in the halls- girls frantically pulling down their skorts when they reach the door of notoriously strict faculty, warning their friends on days when uniform citations are being written up at unusually high rates. Of late, short-skort-length-induced uniform citations to girls have appeared to become prevalent, with some girls receiving multiple citations since the beginning of this school year only one month ago.

This is how it usually plays out: a member of the faculty or administration points her out in a crowd. She is sent to the Dean’s office and reprimanded. Then, she is finally allowed to continue with her day after having her own learning interrupted, when what she is wearing is supposed to be the alleged disruptor of learning. She doesn’t think much about the reason behind the rule she has broken. It’s time we start thinking about the reason. The Upper School Handbook does not explicitly state why it is that form-fitting and short skorts detract from the seriousness of the academic pursuits here at MCDS. Would we, as Upper School girls, appear to be more serious about our academic pursuits if we wore Risse Brother’s trousers rather than skorts? This apparently proves to be true.

Telling girls that the length of their skorts can detract from the “seriousness” of an environment is an outdated concept, a result of the puritanical foundation this country was built on by our forefathers- the same forefathers who did not consider women in our Constitution. How can we achieve total respect and equality when we are still tethered and limited in our ability by traditionalism and conservatism? It would not be outlandish to claim that by telling young girls that their skorts detract from the “seriousness” of an environment, we are promoting rape culture. Rape culture in no way means that our society promotes rape. It does, however, cultivate the toleration and justification of sexual violence and the practice of blaming the victim. Rape culture normalizes and defends the taking advantage of the female sexuality, or the sexuality of any gender for that matter, due to sociological beliefs made surrounding gender and what “should” be.  If you’ve ever heard the phrase, “she was asking for it,” that’s rape culture, and these rules indirectly submit to that concept. If you’ve ever heard someone ask, “what was she wearing?” upon hearing that a girl was raped, that’s rape culture. Since they are young, girls are taught that their bodies are distracting. Their bodies are sources of arousal that must be hidden. Their bodies are disrespectful and distasteful. Their bodies are offensive. In order to be taken seriously, girls must dress modestly. So, we are told not to wear short skirts. That’s the way it’s been and the way it is now, but that’s not the way it has to be. Our character is not measured by the length of our skirt. Skorts of a long length do not indicate prudishness and skorts of a short length do not indicate suggestiveness. They do not indicate anything. They are pieces of fabric, yet obviously so much more.

These rules instill in the minds of young girls the preconceived notion that they are preyed on. That may seem shocking to some, but it’s the truth. These rules make us feel dirty. They make us feel like we’re doing something wrong by being female and that we shouldn’t embrace ourselves. These rules cultivate systematic sexism in our society. We are spoon-fed these rules until they become hardwired into our brains: don’t walk alone at night, don’t leave your drinks unattended, don’t smile too much or you’ll give the wrong impression, don’t keep a straight face too much or you’ll give the wrong impression. “You’re not seriously leaving the house dressed like that, are you?” To girls, harassment seems inevitable, so the only thing we can do is try to avoid it. Society doesn’t teach: “don’t harass!” Instead, it teaches: “don’t get harassed!”

But, like everything, dress code does have a limit. Women should be taught how to value their bodies and respect themselves, rather than be taught to be ashamed of their bodies and hide. I can’t define the universal line between short and too short or tight and too tight for all women, so we must define these lines for ourselves. We know our bodies the best.

Our OpEd Policy: Letters to the editor and guest commentaries may be published in excerpts or full at the discretion of the editorial staff.  The views, thoughts and opinions expressed in letters, excerpts and guest columns are the writer’s alone and do not necessarily reflect those of any other party, including the opinions or policies of the staff. The editors review all submissions including letters to the editors, advertising, guest commentaries and reserve the right to edit, publish and refuse material. Reasons for refusal can include length, clarity, libel, obscenity, and/or material disruption of the educational process at Miami Country Day School.