The Overlooked Sport of Rowing

MCDS student-athletes share their experiences about this ageless sport 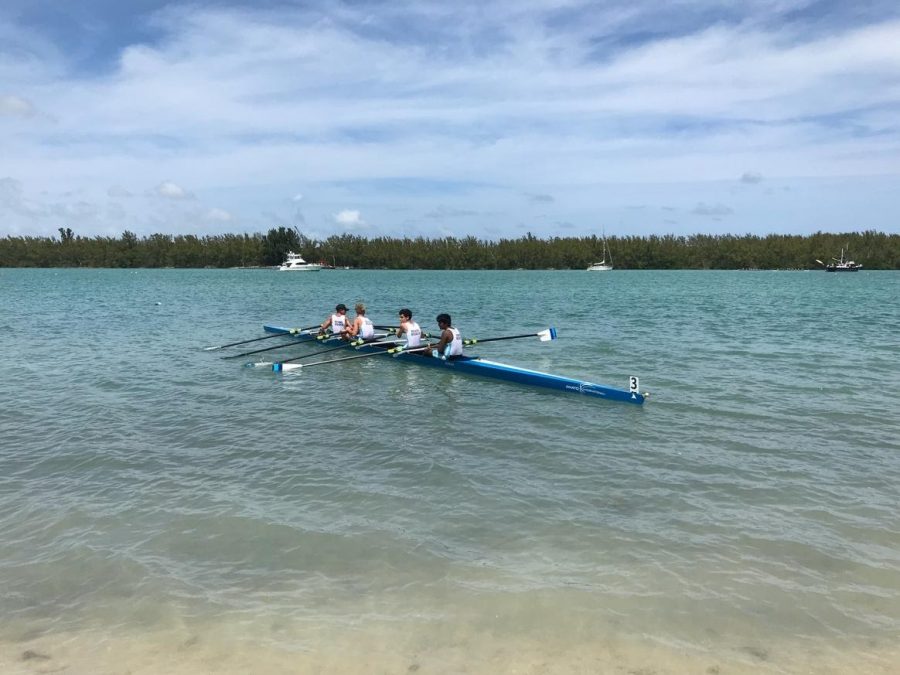 A quad docking at the 2019 Miami International Regatta after a race.

Although rowing, as a sport, sometimes referred to as “crew” in the U.S., dates back to Ancient Egyptian times, it has been on the Olympic program since 1900.  Today it’s one of the only truly timeless and ageless sports that one can start doing at any point in their life. The sport is relatively popular among adults seeking to improve their stamina; however, it is hardly ever considered by teenagers.

High school students rarely risk committing themselves to what they think is just hours of rigorous practice and prefer to choose other, more common sports and completely disregard rowing. This is why most rowers often start having previously played another sport that they eventually quit in favor of rowing. Alex McMillan, a senior at MCDS, says he started rowing a little over two years ago at the Miami Beach Rowing Club (MBRC) and has since kept with it. However, it wasn’t passion that brought Alex to rowing, but a series of injuries that made him seek a sport other than baseball.

“Well, I started with baseball, but I had a bunch of injuries, so I decided to row because it was low impact and my main goal was just to get into shape,” says the seventeen-year-old. Alex doesn’t regret his decision to start rowing; on the contrary, not only was he able to get into shape, but he also got the chance to travel around the U.S., winning medals while representing his club. While the pandemic may have cut his season short, his last regatta may have been his most memorable.

“My last race actually before coronavirus was my favorite race. We were in a quad, and I raced with my longtime friends and longtime teammates, and we beat almost every single one of our like, rivals. Guys that have competed on the world stage. We were underdogs. So, it was really nice,” says Alex proudly. It takes an experience like this one to teach athletes like Alex how to genuinely appreciate the sport. But although Alex loves this sport, he is not sure whether he will continue rowing in college. Of course, for him to be interested in doing it, the college must have a rowing team. However, not all schools do. “It’s a huge time commitment right now,” he acknowledges, “but I think maybe if I go to a college that has a team, I might try out for it. Why not?”

While there are high schoolers competing all over Florida, there are few high schools with rowing teams. The Miami Rowing Club in Key Biscayne along with the Miami Beach Rowing Club off Collins Avenue offer the two most competitive programs in our area.

Vladimir Matovic, head coach of MBRC, affectionately known as “Coach Vladi,” is positive that the sport provides many opportunities, including a chance to get into one of the nation’s top colleges. But what Vladi really enjoys is watching how his kids get better over the years and rejoicing when they get recruited.

“As a head coach, I would like, of course, to have more kids going to nationals and more kids getting recruited, even though every year, we have few kids recruited to big schools, to Ivy League schools. So, we have few kids at MIT, currently one [at] Cornell, and we have [them] all over the place: Boston University, Boston College, University of Miami. Kids get recruited from our club, which is a big deal for us,” he says, satisfied with the results. But Coach Vladi has personally benefited from the sport that he once chose to do in college: it allowed him to move to the U.S. from Serbia, and his rowing career continued to thrive.

“It’s a big thing when you go to college to be part of a rowing team,” he emphasizes with his deep and rich Mitteleuropean voice. “And that is how I came. I got [a] full athletic scholarship.” He believes anyone can start rowing when they’re in high school and no previous experience of any kind is needed. What he stresses is that a rower should be determined and motivated to continue going forward, no matter what. Vladi says he has coached many kids who went from struggling to finish to competing on a national level and motivation was the key to their success.

“You start when you’re in puberty, 14, 15, 13 (maybe girls) and everyone starts from zero, and they build up from there. Even in the past, we had some kids who barely practiced sports, and they came here, and they were really good at rowing, went to Nationals,” states the proud coach.

Brooke Nieder, also a senior at MCDS, says that at first, she didn’t take rowing seriously, and it wasn’t until varsity that she got passionate about the sport. “I think my goals were just to have fun,” says Brooke, “and then it sort of became more competitive with me as I, you know, went into varsity.” Rowing really does get more competitive as kids get to varsity because bigger boats that sit up to eight people are involved. And, of course, the more people, the more competitive it gets.

If you are looking to not only be part of a close-knit team but also acquire a new friend group, you must at least give it a try, because it’s not just rigorous practice, but unforgettable memories.  “That’s three hours a day that you have with your teammates, so you get really close with those guys,” Alex comments on the relationship he has with his friends from practice.

An important thing to consider if you live in Miami is that you can go on the water all year round, so you might as well try it out. Who knows? Maybe in a few months, you’ll begin to understand why Coach Vladi is so fascinated by the sport.