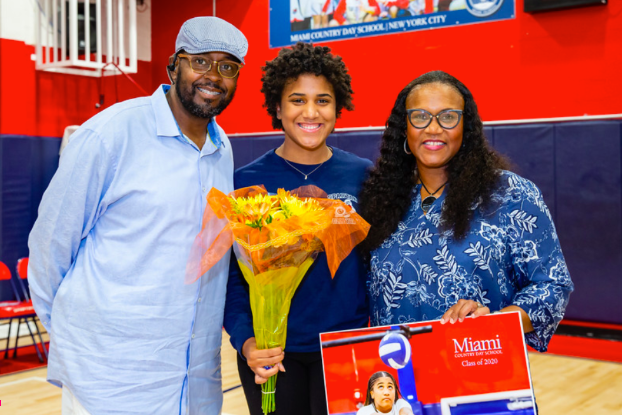 Photograph by open i studio

Rianna and family at Senior Night. Next stop: Mount Holyoke.

After 7 years in the spartan volleyball program, Rianna Washington has signed to play volleyball at Mount Holyoke in Massachusetts as a Posse Scholar.

“I have been playing volleyball since sixth grade. I started playing when I came to Country Day. I was inspired to play volleyball after I shadowed Maddy Sukhdeo in fifth grade and she used to be on the school team. I dreamt of pursuing a career out of volleyball in middle school, but I didn’t start taking it seriously and pursuing colleges until tenth grade. I improved my performance over the years by playing on a club team and I would constantly train during the summertime and on weekends. It’s pretty chaotic to be a part of a club team because as soon as school volleyball ends, club starts. Club costs a lot of money, you go to tournaments every other weekend, and you practice until late at night at least three times a week. A lot of my proudest moments in my volleyball career come from club. I played for a really small club team and in 10th grade we were a team of only six people, and six are all of the people on the court, so I was constantly playing. That was the year I changed the most as a volleyball player. My first time being a captain of a team was in eleventh grade during club, and it was a team of completely new girls and we went from being pretty bad to getting better and better with every game and practice, so that was just a proud season for me. One of my favorite memories from playing volleyball at school happened this past season. Ashley Michellin and I were the captains this year and I felt like over the season we were losing games because we were not warming up right. We were at a tournament and I had Bella, the only eighth-grader on the team, lead the warm-up and she decided that we would all play cat and mouse as our warm up. That ended up being our best game of the season. To stay motivated in my sport I kind of just look at the bigger picture. Volleyball is a big part of who I am and it could take me to a lot of places. At the end of the day, I play volleyball because I enjoy the sport and I have fun playing.

I am going to be playing volleyball for Mount Holyoke next year. The way I got recruited was a pretty weird process because it was kind of like two forces working together at the same time. Coach Carpio, who is the coach for Mount Holyoke, sought me out back in the summer before 12th grade year and came to my AAU games. She encouraged me to apply to the Posse Scholarship, so I did, and I ended up getting the Posse Scholarship. Through that, I was able to sign to her team because Mount Holyoke is a D3 school, so they can’t offer me any athletic scholarships. My number one school used to be Spelman College, which is an all-girls school in Atlanta. I like all girls schools because it’s nice to see women flourishing especially in the computer science field, and I love the history behind all women’s schools. When Coach Carpio came to me I had never heard about Mount Holyoke, so I did my research and the college looked amazing on the internet. I went on an official visit back in August where I completely fell in love with the school. To prepare for the season, I am doing private lessons and in the summertime, I will be doing group training. Pre-season starts on August 18th. In college, I am most excited about re-establishing myself somewhere new.  I’ve been at Country Day since sixth grade, so in college, I want to start a new me. Looking back, the advice I would give myself when I first started playing volleyball would be to decide what you want out of the sport. If you don’t put out there what you want you’ll never get opportunities afforded to you. In sixth grade, I didn’t know what I wanted. I wasn’t training as often and I could have been much further ahead if I just started earlier with the whole recruitment process. I honestly don’t think I will continue playing volleyball after college. I could see myself coaching and playing for fun, but I do not see myself playing professionally. This year, we were a couple of games into the season and I tore a part of my MCL, so I wasn’t able to play for most of the season. My injury made me realize that volleyball is really just for fun. This is something I love to do and it will always be a part of my life, but there are a lot of other things that I like to do as well, so volleyball will not always be my main focus.”

Volleyball Coach Eric Rivera said “Rianna is a student-athlete of great qualities both on and off the court. She is destined to be a great athlete but above all, a great human being that will make a difference in society.” 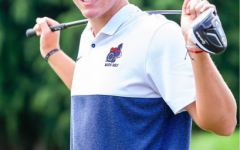 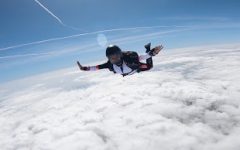 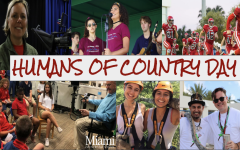 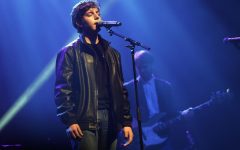 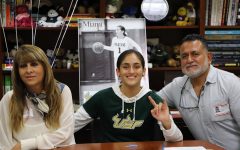 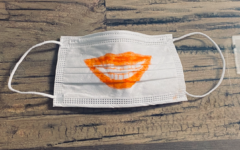 Back to School with Covid 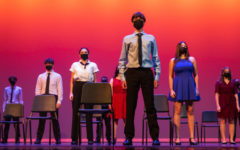 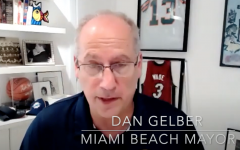 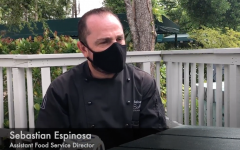 Sushi and Bang Bang Coming Back!